Before there was Uncle Sam, predating Lady Liberty, there was Columbia, a personified symbol of America not unlike Marianne of France or Britannia of the United Kingdom.  A maternal beauty with a buxom figure, she is clad in classic Greek robes, flowing untaylored around her able, athletic and youthful form.  Her feet are strapped into classic sandals, but there is a hint of aboriginal American features to her cheeks, her sloped liberty cap that falls forward in a nod to something once plumed.  Often her vestments are adorned with the stars and stripes, holding a shield or flag representing the Union. 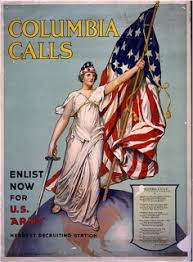 First coined by of the author of The Gentleman’s Magazine in England as a code name for America, Columbia is the female version of the name Columbus, the reputed discoverer of America (which is a falsely endowed distinction, as outlined previously on this blog in Lenni Lenape Day).  As reports on debates in Parliament were illegal to publish in the United Kingdom, Edward Cave worked around this rule by using a thin guise, calling them “fictional” Reports on the Debates of the Senate of Lilliput.  Columbia frequented those pages until 1746.

It is only natural that our English-turned-American colonists would adopt the coinage in more glorified terms.  The maternal imagery of Columbia personified suckled a fledgling country as it weaned its way to more adolescent ages, searching for an identity all its own.  Phillis Wheatley, an African slave of Boston who was educated by her owners, encouraged to write, and even published in England and New England, was the first to poetically refer to Columbia as our nation, powerful and righteous against Britannia’s long-seeded strength:

One century scarce perfom’d its destined round,

And so may you, whoever dares disgrace

The land of freedom’s heaven-defended race!

Fix’d are the eyes of nations on the scales,

For in their hopes Columbia’s arm prevails.

While rond increase the rising hills of dead.

Lament they thirst of boundless power too late.

Phillis Wheatley in a letter to George Washington, 26 October, 1775.

Columbia became a very fitting symbol of our new country, its spirit and idealism during the American Revolution, and ironically was brought forth with grace by none other than a Bostonian slave whose real home was Senegal in  West Africa.The slouchy cap that became standard issue for Columbia derives from Roman tradition, used by priests to present to freed slaves and now regularly used as a symbol of liberty. What hope must have burst in the heart of Phillis Wheatley, a woman who did find personal liberty in 1774.   (http://www.post-gazette.com/stories/sectionfront/life/hail-miss-columbia-once-a-us-symbol-shes-lost-out-to-uncle-sam-lady-liberty-385432/).

Columbia later lent her name to the prestigious Kings College in Morningside Heights in Upper Manhattan, as the name of our nation’s capital district, as well as many other city names throughout America.  Film Companies, recording companies borrowed its renowned name.   Columbia reigned, and  Hail Columbia tolled as our national anthem from 1777 until 1931.  A Library of Congress recording can be heard here, and remains a tribute piece to announce the Vice President at State Dinners.

She sadly, or perhaps justly, fell out of favor after World War I, a conflict that left our relatively new nation painfully understanding the costs of that Great War.  Disenchanting after a conflict with no real justification, the same pleading Columbia from propaganda posters that urged our citizens to take up arms and to buy war bonds looked tarnished and lacking in her original righteousness.

Montclair, New Jersey lost seventy-one of her sons during the misnomered War to End All Wars, a devastating loss incomprehensible to a generation of people who have gratefully not known war on that same gruesome level.  To pay deserved tribute to those fallen, the townspeople collectively raised funds to pay for the towering monument that now is lent to our township as its trademark.  Its surrounding park acts as a quasi-town green, welcoming its citizens to enjoy a swath of land that was bravely defended, indirectly, by those 71 dead, amongst many others.

Appropriately, Columbia graces the monument and is forever perched at the base of our obelisk, a nod to America’s former image.  On the original program of the Unveiling Ceremonies is her description, a mother figure to a young nation whose eyes were painfully opened to the dangers of nationalism:

As her sons press eagerly forward where duty calls, Columbia, wafted as though on the wings of the morning, follows, her countenance aglow with love for her children, her great mother heart reaching out to encircle and protect them with the power of her might – the Shield of the Union, carried on her outstretched left arm, even while with a light touch of her right hand she urges them on in the cause of Freedom and Right.

Now she stands unrecognizable to most who pass her, an aged figure with an oxidized complexion.  Columbia was once America personified, but now stands as an historical reference, less powerful than Uncle Sam or Lady Liberty, but righteous all the same.  Her original purpose can be rediscovered, rather like a scorned politician who history has treated well, but whose legacy has to be researched in a long-forgotten text book.

A book about her story is forthcoming, from Ellen L. Berg, an affiliate Assistant Professor at the University of Maryland.  A sneak peek into her research can be found on the Opinionator Blogs on the New York Times web site.